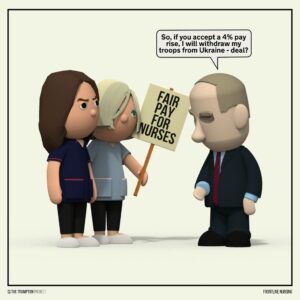 I watched agog as Nadim Zahawi went on the media rounds to brief – predictably- against our brave nurses and their strike action. With zero sense of self-awareness, he tried to paint their reasonable request to be paid what they are worth as “unfair” and “unpatriotic”, even at one point claiming it was “playing into […]

The UK: Britaly or the sick man of Europe? What our neighbours think of us 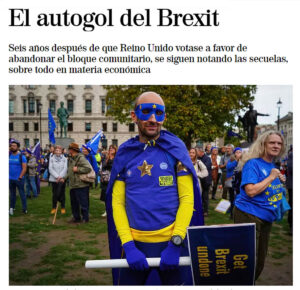 Sick UK What a headline … “Reino Unido, atrapado en su propio laberinto político y económico” (the United Kingdom, trapped in its own political and economic labyrinth). Enough to make you feel proud to be British? Or to acknowledge that our friends and neighbours pity us for what is happening to the UK? This was […]

A monstrous aberration? The UK’s accelerating descent from democracy to ‘plunderstate’ It has been widely reported that Conservative Peer Baroness Michelle Mone and her family had received almost £29 million from a firm on whose behalf she had lobbied. She helped PPE Medpro to win government contracts worth over £200 million for providing personal protective equipment (PPE) during the pandemic. As the Financial Times writes: “The government came […] 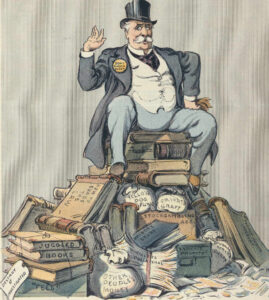 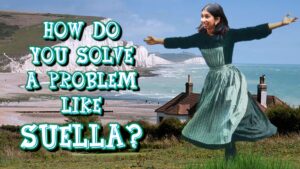 Suella Braverman is under severe pressure to resign as her story falls apart and a pattern of behaviour emerges. Sadie Parker spells out why she must, must go… If Rodgers and Hammerstein were invited to write about the political soap opera of British politics this past few weeks, they might be tempted to re-write the […]

Caught the Tory Johnson amnesia or know someone who has? Here are fifty reminders of why he is unfit for office 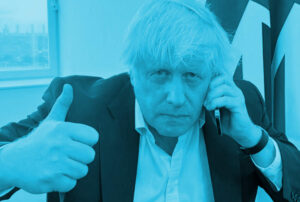 We liked Marcus’s Twitter compilation of crimes and misdemeanours and thought you would, too. A useful aide-memoire… Will the Conservatives REALLY choose this self-obsessed serial liar and incompetent? Please note that there are a few typos which could not be corrected by us. Please excuse these! and let’s not forget the Russia connections! even the […]

If a lying, lazy, venal narcissist is the answer to the Conservative party’s problems, then they are well and truly &*$&£%! 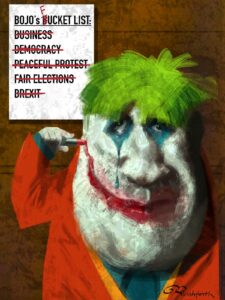 My blood is boiling. What is there to say about a political party which has absolutely trashed this country’s reputation, cratered the economy, run-down the NHS, increased poverty, increased social inequality, broken the law, taken Russian money, implemented corrupt practices to favour their cronies and donors, presided over the avoidable deaths of tens of thousands, […]

Eyes on the lies: four videos – please watch and share 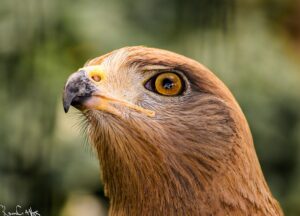 The first is a timely reminder of the role played by the Brexit-supporting, Conservative-backing right wing media: The second is very possibly Led by Donkeys’ most important work to date: And the third, highlighting the dreadful legacy of Brexit and emphasising the ideology behind Truss et al: Finally, here’s an extract from a video of […]

Let’s end the power of political donors: letter to the editor 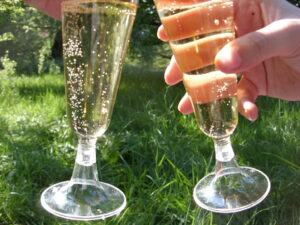 Dear West Country Voices, Recent events in politics have brought several things to the forefront of my mind. I wrote previously about the need for electoral reform, but now another revelation has become crystal clear to me.  What I have seen in the previous few weeks has led me to believe that, as well as […]

Primed Minister – who really holds the reins of power? 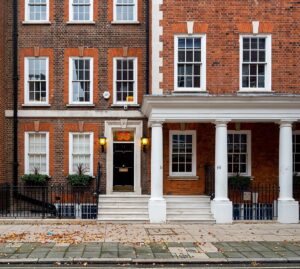 As it appears that the mainstream media are finally beginning to take an interest in the insidious power of opaquely-funded think tanks, Ian Shaw expresses, in his inimitable, quirky style, his contempt for the current government and his concern for the influence these shadowy backers wield – hitherto largely ignored or. worse still, showcased and […] 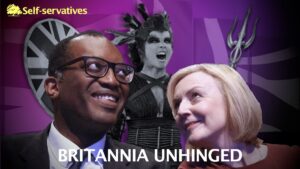 Drink heavily, buckle up, and let's get started with a visit to the Tory Party Conference, where the most dense things in the known universe are packed into one room, and we all pray it reaches critical mass and explodes. Yet another #TheWeekInTory: 1. Liz Truss – ITV4 made flesh – got dressed up as […]

What not to dare 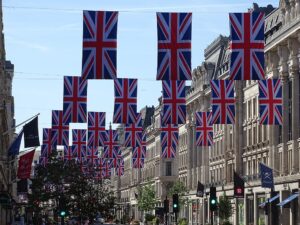 The terrifying, chaotic incompetence of the last ten days in the UK is characteristic of a failing state, says Andrew Levi – a veteran of numerous hair-raising disintegrations of order around the world – in a long read. Feeling able to pretend we’re immune from such disaster is a luxury only available because, imperfect though […]

Just a few days in Tory… Eyes on the lies, everyone! 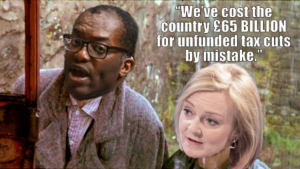 Russ Jones has done it again. Expect updates! 1. Our new PM, Margarine Thatcher, said she was “absolutely committed” to cutting tax for the rich 2. Then she cancelled tax cuts the rich 3. Truss boasted she was prepared to make unpopular decisions 4. But her decisions were unpopular, so she cancelled them 5. Truss […] 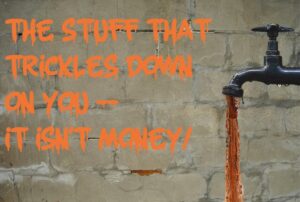 But who’s consulting local residents on whether they want their areas turned into free-fire zones for developers and predatory corporations, asks Tom Scott. The government says that it is in discussions with 38 local authorities that have expressed an interest in having so-called  ‘investment zones’, as announced in Kwasi Kwarteng’s special fiscal operation on 23 […]

Johnson was a disaster. Truss has set out to be worse 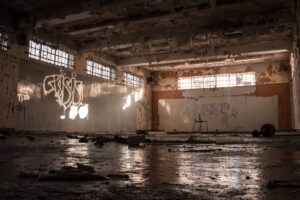 Yesterday [6 September 2022] was bad. It was, in fact, very, very bad. If Johnson was a disaster, Truss has set out to be worse. Richard Murphy very much doubts that any prime minister has set out to create so many conflicts from the outset of their premiership in the way that Truss has. The […]

The 101 damnations: Johnson’s ‘principles’ of government 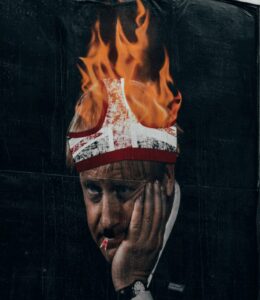 To mark the final day in office of a unique prime minister, here are my definitive, expanded, 101 Johnson principles of government. 1 Accept responsibility for nothing. 2 Blame others for things that are your fault. 3 Take credit for things that aren’t your doing. 4 Preach unity and sow division. 5 Always speak with […]

The cabinet of horrors 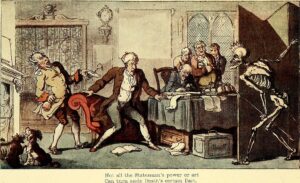 Assuming Tim Shipman’s tweet is true, let’s do a quick #TheWeekInTory style tour of our (probably) new cabinet. It is a thrilling prospect. Liz Truss Margarine Thatcher. Gilead Commander’s wife who did three U-turns during her campaign, making Liz Truss a more effective opponent of Liz Truss than Rishi Sunak was. Is her own worst […]

Don’t cry for me, sweet Britannia 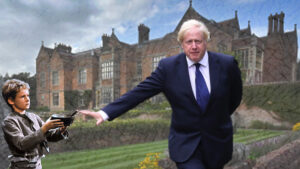 Here’s a tribute with a difference to our outgoing prime minister, Boris Johnson. Well, I say tribute… a review, at least. Hum the tune of “Don’t Cry For Me, Argentina” as you read. The lyrics have been modified to reflect Boris Johnson’s “achievements” as Britain’s worst prime minister since World War II (according to a […]

Boris Johnson – not Churchill, but Farquaad 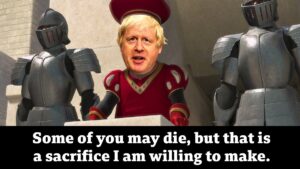 The last, dark days of his premiership have shown that Johnson has only one care in the world: to salvage his own reputation, argues Tom Scott. When Boris Johnson insisted that he would stay on as a ‘caretaker’ prime minister, despite having lost the confidence of his own MPs, there were many who were sceptical […]

That Maitlis speech: truth and facts need no rebuttal 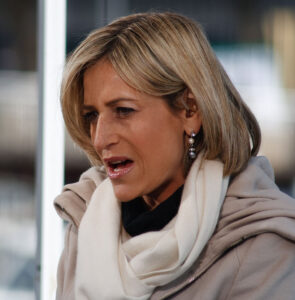 What Emily Maitlis seemed to me to be saying in her Edinburgh lecture was that there are truths that need to be told that can be stated as facts without requiring rebuttal. A short thread to discuss this….. There is, for example, a phenomenon called climate change. No broadcaster need balance that opinion with the […] 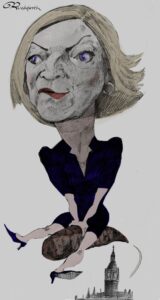 Look, it has to be said, Mr. Rushforth is sorry about your poke bowl or whatever it is you have instead of a decent breakfast, but ever since word got out that a majority of Tory MPs, including our Prime (pork and cheese) Minister-in-waiting, Liz Truss, voted against amending a bill to stop water companies […]

This government attacks lawyers who uphold justice and backs those who support injustice. 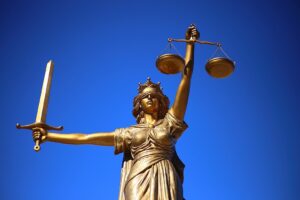 I am fed up with Tory attacks on lawyers who defend people against injustice, discrimination, abuse and deportation using the laws parliament has created when they say nothing about those right-wing lawyers who spend their time attacking almost everything of value. This cover from The Mail today is typical of the attacks on lawyers. In […] 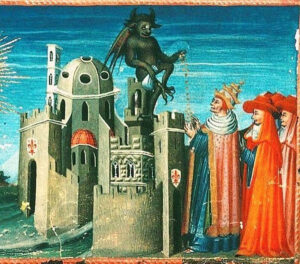 There are moments in the Comedy when Dante burns with righteous anger. One of them is his encounter with the simoniac popes. Strictly defined, simony is the buying or selling of spiritual gifts, offices or artefacts. A form of corruption, it’s named after Simon Magus, a first-century sorcerer who is said to have asked the […]

Truss trips up over pay policy, but keep your eyes peeled… 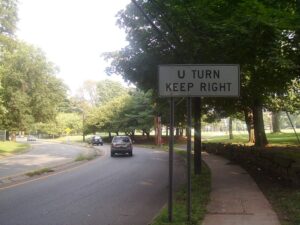 “Let me be clear.” It’s the politician’s go-to phrase when they’re in a tight spot and an indicator that a swerve, obfuscation or outright lie is incoming.  And there we were again, as our Liz was being clear about her mess of a policy around regional pay. Truss is a serial offender at being “absolutely […] 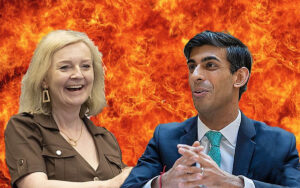 Dear West Country Voices, Is it true that a lot of the 160,000 Tory Party members who are now choosing our next PM will ‘spoil’ their votes by putting Boris Johnson’s name on their voting papers? The British people will not find out until after September 5, the closing date for this ‘private’ election. Parliament returns […]

The Human Rights Removal Bill: the video of our webinar will tell you what you can do 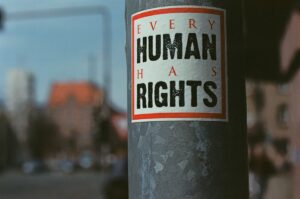 On July 27 we hosted another of our informal discussions on a hot topic. There is nothing hotter right now than human rights, under assault from this government on multiple fronts and via multiple bills. We take our rights for granted at our peril. Key takeaways from our panel – Cal Roscow of Best for […] 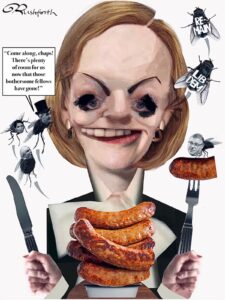 Mr Rushforth humbly puts before the discerning public his latest tribute to the lawmakers of this sceptred isle, who work so tirelessly and ceaselessly on behalf of us all – the privileged and better bred of our society and the feckless and indeterminate mass of common people, alike… Behold, the Right Honourable Thatcher body-double, Liz […]

A government allergic to scrutiny blames the ‘deep state’. UPDATE 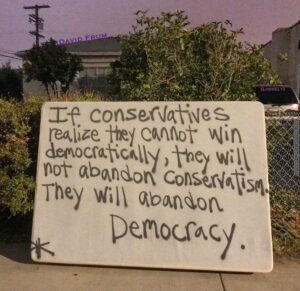 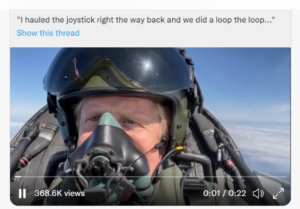 If you’ve watched either of the two ghastly Conservative leadership debates, you’ll know that this country is headed not for any change for the better (as if!), but for a slightly different flavour of awfulness, incompetence and ideology than that which was served up by the liar, Johnson. I cannot say I am surprised that […]

Put on your thinking caps! Letter to the editor 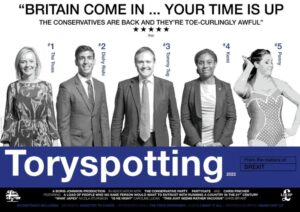 Dear West Country Voices, Like many others up and down the land, I was delighted by the news of Boris Johnson’s resignation. It has taken long enough. However, my euphoria has rapidly dissipated as I have forced myself to witness the pathetic farce of the leadership race. Even referring to it as a ‘race’ with […]